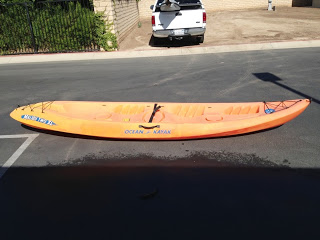 North of LA, surf quality takes a turn for the worse in the summertime. Long periods of 1′-2′ dribblers, punctuated by the occasional (some would say “rare”) south swell is pretty much the case. Finding an alternative ocean activity is a must. For me its kayak fishing. Through some trading and bartering I acquired this Malibu 2 XL tandem kayak.

The Malibu 2 is a great tandem yak, but what makes it particularly useful is that it has a center seating position which allows it to be paddled solo. This allows for plenty of deck space for fishing gear and (hopefully) fish! So after some internet research, a little purchasing and a lot of scrounging I built this

Turns out that the days when the surf is flat are ideal for kayaking. Most sit-on-top kayaks are built out of polypropylene plastic which is almost indestructible. Which helps when dragging it over rocks, across the beach or across a parking lot.