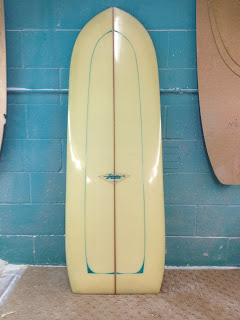 Last month, a guy named Bill brought a board into my glasser’s
(Ray Lucke) shop. We do a lot of ding repair so this wasn’t anything unusual. I
was in the back shaping when one of the guys came back and told me to come look
at this odd-looking board. Here’s what I saw:

Bill told us the board belonged to his old aviation tech
school roommate and childhood friend, who bought the board in 1969, surfed it a
few times and then left it with Bill’s father in Glendale
while he went back to Montana.
Tragically, Bill’s friend was killed in an auto accident before he could retrieve
his board. The board remained forgotten in Bill’s father’s attic for over
40yrs. When Bill inherited the house from his parents, he re-discovered the
board. Ray recognized the logo of the glasser (Gunther Glassing Northridge, Ca)
and a few phone calls later Danny Tarampi, former owner of Gunther Glassing
(1963-75), was at the shop giving us the board’s complete history.Danny told us that in the late ‘60s, surfboard manufacturers were scrambling to get on the shortboard bandwagon. Hobie delivered several longboard blanks to  Gunther Glassing with orders to re-shape the blanks into shorter boards. Danny said the only shortboard shape he was familiar with at the time was a paipo, and offered to shape a big paipo. He referred to the board as a “cut-down”. The boards were glassed by David Artz.

The board is in perfect condition with only a couple of
gloss-coat scratches. Seeing this board and hearing its story from the man who shaped
it was like opening a time capsule. I asked Danny if the board was ridden prone or standing up. He said most people rode them prone, but knew of one surfer who was able to stand up on it.