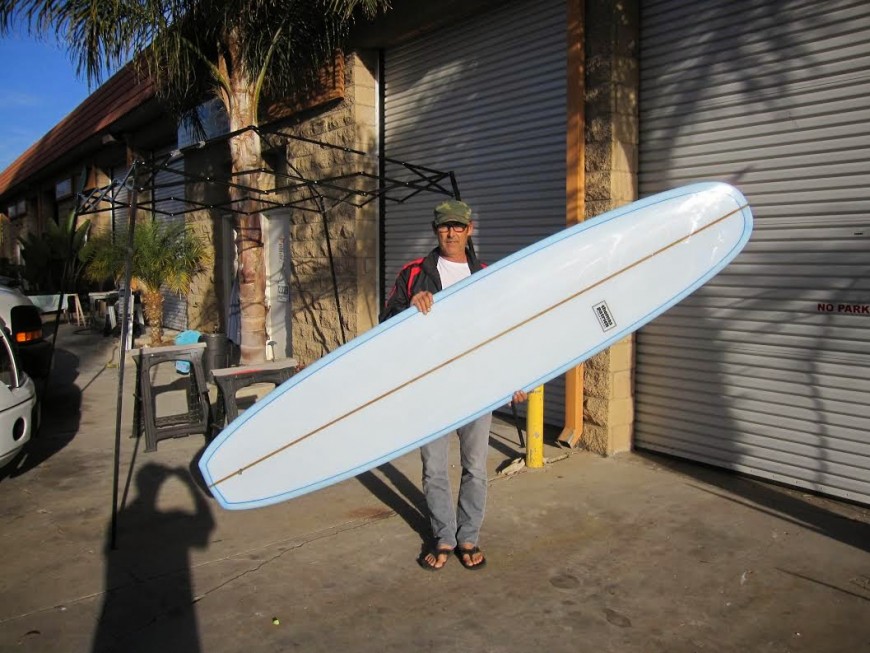 In 1966 Nat Young won the World Surfing Championship on a 9-2 longboard, which was almost a foot shorter than the other competitors. Surfers around the world took notice, and immediately began to shorten their equipment. In 1968, an Australian shaper names Bob McTavish added an extreme V-tail to his already shortened (8’10”) board, and was able to greatly reduce the radius of his turns. This shortened turning radius led to more across-trimline surfing and eventually to the vertical surfing style we see today. This board is an exploration of those early design features, and is inspired by other modern examples of this shape, such as the Gene Cooper’s V-2, Ryan Lovelace’s V-Bowls and Steve Boehne’s Aussie ’68. When my customer, Kirt, saw a couple of these, he immediately recognized the potential and just had to have one.

The main goal of this design was to build a small-wave noserider, that turns on a dime, feels lively under foot, but still offers good noseriding. Starting with the basic wide-point behind center Pig outline, I shrunk the length to 8-10 and added some width in the tail and nose. The rails are slightly pinched, 50/50 with just a touch of down rail in the last 6″. I started the extreme V  about 39″ from the tail and maintained it all the way out the tail. This V adds almost an inch of rocker at the rail, and is the key to quick, flowing turns. A 2/3-length concave on the bottom enhances noseriding.

And here is the V-Pig in the eager hands of its owner (and co-conspirator) Kirt.