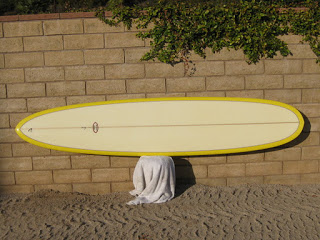 I made a ridiculously low bid on this 9-6 Velzy “never-ridden-never-waxed-with-original-foam-packing-pad-taped-on-bottom”…and I won!! I caught the auction on the next to last day. There was one picture of the deck, shot from the tail, and a close-up of the signature, but no dims and not enough time to ask questions. I bid thinking I would never get it so I wasn’t too concerned. I assumed that the board was a single-fin, pintail noserider with boxy 50/50 rails, and thought it would make a great small-wave board. The lady I bought it from told me she bought it from Velzy’s widow shortly after he died in 2005. The lady stashed it in her garage and left it there just as she bought it. And, yes she was disappointed that the winning bid was so low. (another Velzy, bought by her friend at the same time under the same circumstances, fetched $1100 at a recent sale)

When I went to pick it up I discovered that it was indeed a “new” late model Velzy, but I was surprised by the shape. As can be seen in the pictures, it looks remarkably similar to a Taka DT2 or DT3 in outline and rocker, with pinched eggy rails and a 2+1 fin set-up. Hardly the traditional NR that I was expecting, but a beautiful board nonetheless.

I spent the day today “blueprinting” the board shaped by arguably the most famous shaper of all-time and one of my surfer/shaper heroes. Here are the dimensions I collected: 9’5” 18-3/8” x 23-1/8” x 15” 3” thick, NR 5-1/4” TR3-7/8”. Bottom has shallow (1/8”) blended nose concave that extends 36” down the length. There’s a short (maybe an inch or so), flat section right where the nose concave ends that begins to turn convex or rolled panel V as it progresses towards the tail. At 48” up from the tail, this V is 1/4” deep at the rail, where it remains until 12” up where it becomes 3/16” and then progresses to “0” at the very tail. The rail is turned up in the last 6” of the nose and then becomes more of a 60/40 egg rail, turning down hard in the last 12” of the tail. Nearly half of the nose rocker is in the last 6”. This flip is undetectable from the deck side, as the bottom has been brought up to the deck. The final 3” has nearly a 1-1/8” radius. Yeah, I know…geeky shaper stuff. Here’s the best part…

…of course I’m gonna ride it!