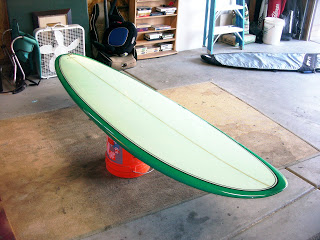 The “Egg” is a shape I’ve been working on since I started
shaping 7 yrs ago. “Wingnut” once remarked that one day he got barrelled on his 7-6 egg and later that day was pushing his son into waves on the same board.  Here’s the first egg I ever shaped.

I borrowed a template from my friend and mentor Steve Boehne,
and had the board glassed at Moonlight Glassing. I ignored Steve’s advice to
“stick with the template” and attempted to widen the board to fit the numbers I
wanted (typical rookie mistake). End result was a slight flat spot at both ends (Pete St Pierre
called it a “platypus” nose), but the board worked really well. Several eggs
were to follow and while all of them worked, I wasn’t able to capture that
classic “eggy” outline to my liking. I finally figured out that I didn’t need a
14” tail to keep the board responsive. Encouraged by the performance of my
latest egg, which has a very full outline but too much volume for my liking;

I
went back to the drawing board and came up with this:

I think this is the quintessential mid-sized egg. No bumps
or wings in the outline, and a straightforward bottom with just a slight bit of
concave and a little V out the tail. Rails will be tucked 60/40 transitioning to more of 80/20 in the tail. I considered the more traditional eggy rail, but I think a tucked rail is faster to plane and just faster in general. Obviously influenced by the eggs of Dale
Velzy, Steve Boehne, Mark Martinson, Gordon & Smith, Becker, Takayama and a host of others,
there’s really nothing new here. I’ll go with a 2+1 fin set-up to provide
stability with solid performance, and a wide-range of fin configurations. I’ll
be able to go from 8-1/2” single fin to a 2+1 with cut-away center fin to a
tri-fin set-up (using 4” center fin). This shape is designed to meet the needs
of most surfers in most conditions.

I’ve transferred the outline to Masonite. Next step is to
order a blank with the rocker adjustments I need and the stringer(s) I want
(cedar, of course, but how many?). I could go EPS/Epoxy, but I’m thinking I’ll
ask Ray to do some of his resin color work, which favors polyester resins and
polyurethane foam (by default).